Unless you live in North Korea, you’ll probably have heard all the commotion over 3D printers. So what is a 3D printer and what’s the big deal?

What is a 3D printer?

3D printing is the name given to the process of printing 3-dimensional objects. They use a process where successive layers of material are added with each passing of the 3D printer’s nozzle. 3D printers are capable of printing almost any shape produced by 3D software like SolidWorks. 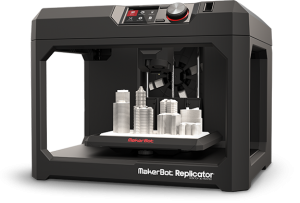 How Does a 3D Printer Work?

3D models are made using computer-aided design (CAD) software or 3D scanners. 3D scanners produce three-dimensional models by collecting digital data on the shape and appearance of a real object. 3D models can then be produced using this data.

Because making 3D printable models can be difficult for the average consumer, 3D printing marketplaces have emerged in recent years. These online shops allow people to purchase pre-made 3D models that can be printed. Shapeways, Thingiverse and Threeding are among the most popular of these marketplaces.

Using a “slicer”, 3D models are sliced into very fine layers and coded into instructions for a 3D printer. The 3D printer uses the coded instructions to print successive layers of liquid, sheet, powder and paper materials to build the model from a series of cross-sections. These layers become fused and form the 3D shape from the 3D software.

Which Materials Can I Use with a 3D Printer?

What Are 3D Printers Used For?

Most of what 3D printers are used for is rapid prototyping. Using 3D printers to rapid prototype reduces lead time and the cost of developing rapid prototypes through other means such as injection moulding. However, with technical advances, common uses are now seen in design visualisation, metal casting, architecture, education, geospatial, healthcare, and entertainment/retail.

In industry, 3D printers are used in several industries including aerospace, architecture, automotive, defence, and dental, among many others.

The University of Glasgow showed in 2012 that it is possible to 3D print chemical compounds, including new ones. This was tested and confirmed by Cornell Creative Machines Lab. Professor Leroy Cronin of Glasgow University has suggested that it should one day be possible to use chemical inks to print medicine.

Companies are offering services where objects can be customised via web-based software. The customer is able to order their custom part. Nokia uses this system to offer 3D printed mobile phone covers.